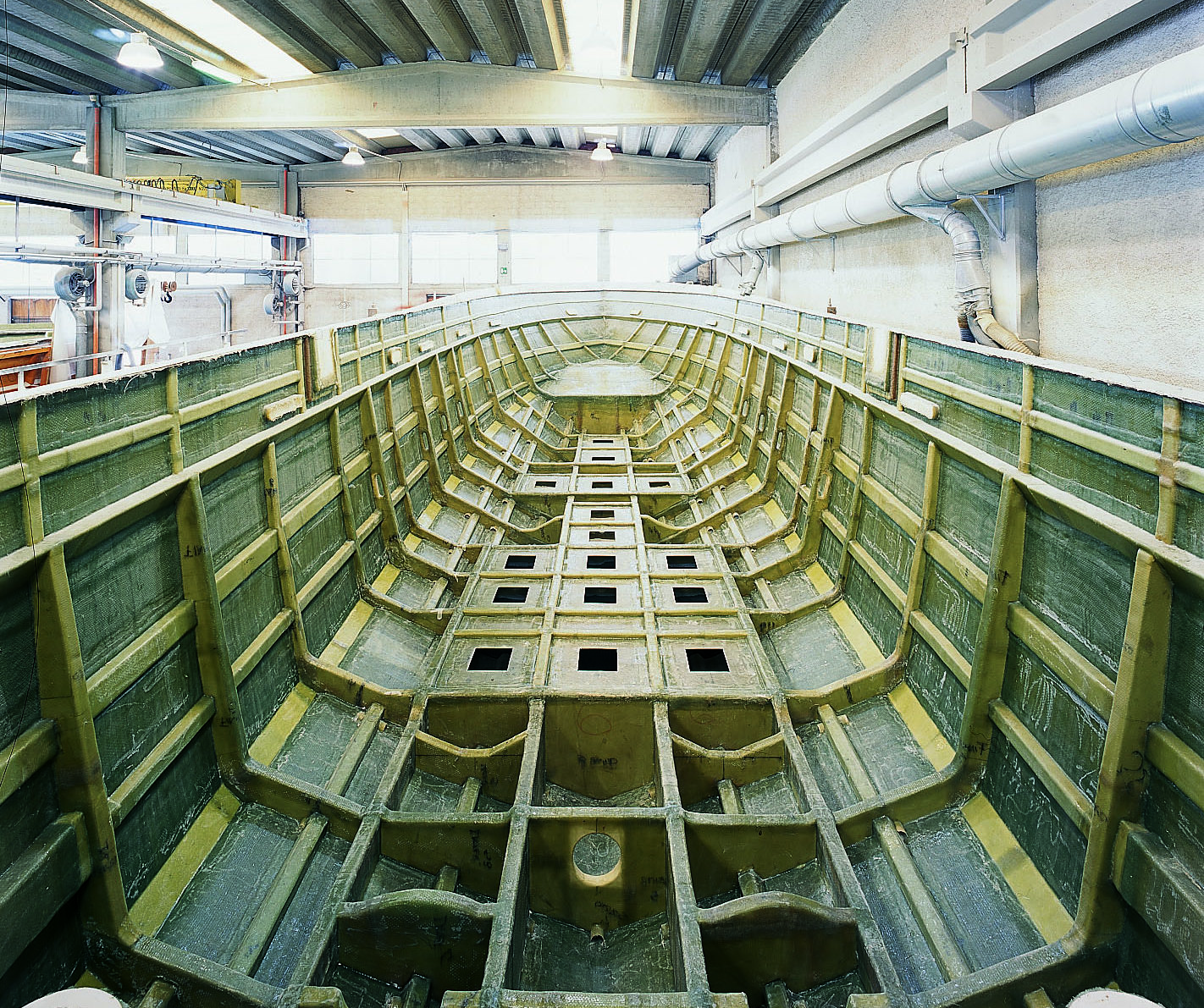 The marine industry is more and more committed in all sectors towards increasingly eco-compatible solutions respecting the marine environment. There are various research areas for an ecologically compatible boat, currently studies have been carried out to optimize technological processes, materials and diesel-electric propulsion systems have been developed with low noise and low emission characteristics, allowing navigation in protected areas and silence in mooring areas, in port and at anchor.

Since the ’70 of last century, the boat construction has seen the increased use of reinforced plastic materials, to the detriment of metals and wood. The use of polymeric composites has become ever-increasing, thanks to a series of technical-economic advantages including the high specific strength, that is, the ability to present good mechanical characteristics while maintaining a reduced weight of the product.

FRP (Fiber-Reinforced Plastic) composites are materials of great interest for the marine and naval industry, thanks to their lightness, mechanical strength and corrosion resistance. However, they have some disadvantages related to environmental impact, as they still do not meet the 3R requirements (reduction, reuse and recycling). Furthermore, most of the polymers and reinforcements used in the production come from non-renewable sources or require very significant energy consumption. FRP consists of fibers, incorporated in a matrix of thermosetting (thermoplastic) resins, usually polyester, vinylester, epoxy.

However, the adoption of FRP in the recreational boat industry has created, particularly with reference to the environmental impact due to the manufacturing, considerable problems.

It’s now a long time that the problem of recycling fiberglass and composite materials in general, is considered and studied but, although a considerable effort has been made internationally to find economically sustainable solutions, at the state of the art there are several recycling techniques but none really satisfactory.

It is important to emphasize that the frontier of ecological sustainability is no longer seen only from the point of view of the use of raw materials that should be degradable or easily disposed of at the end of their life, but also by implementing efficient and low energy impact systems. It must be also remembered that recyclability is an important concept of “eco-compatibility” that allows the use of materials that are not eco-friendly in themselves, but easily separable from one another

To this end, at international level there were a series of legislative provisions (increasingly stringent) aimed at regulating and controlling the industrial activities involved in the

process of placing harmful volatile compounds in the environment.

WHAT IS A RESIN?

Technically, resins are high molecular weight organic polymers, obtained from a series of polycondensation reactions of various monomers and co-monomers.

They are practically one of the two main components of the material that constitutes the fiber-reinforced composite boat. It is used to hold the fibers together and to transfer loads

it is an aromatic hydrocarbon, whose formula is C8H8 it is practically one of the main components of unsaturated polyester resins. It is present in a variable size from 35-45%

In the polymerization phase instead, when the product is allowed to harden without applying it
further resin, we speak of “static” emission.

How harmful is this solvent? Is it carcinogenic? Consider the toxicity of SOVs
The IARC (International Agency for Research on Cancer) has classified styrene in Group 2B (possible carcinogen for humans). Mutagenic properties are not established. However, the danger is ascertained. The question has been debated for years, but at the moment there are neither safe answers nor valid alternatives.

The technologies used by boatyards can be divided into two macro areas: open mould and closed mould. In the first we find hand lay-up and cut & spray while infusion, Rtm, Vartm, belong to the second category.

Infusion is a molding process for semi-finished products in FRP, through which, the impregnation of the fibrous reinforcement occurs in a closed mold through the pressure difference that is created

between the laminate and the batch containing the resin. The raw materials are: matrix, reinforcements, core materials and obviously the polyester resins (phthalic, isophthalic, vinyl ester) the low-content or low-styrene polyester resins. As an alternative to polyester, epoxy resins are used. They are thermosetting polymers. They usually come in the form of di-epoxide, that is a molecular chain of molecules at the end of which are the epoxy groups (CH2-O-CH) with which they react the binding agents during polymerization.

Recycling fiberglass and composite materials in general, although a considerable effort has been made internationally to find economically sustainable solutions, at the state of the art there are several recycling techniques but none really satisfactory.

In the marine and naval sector, much remains to be done and validated in terms of treatment plants for the recovery / recycling of FRP in order to obtain technologically feasible and economically profitable industrial processes.

Furthermore, the implementation of any FRP recovery / recycling process cannot be separated from the carrying out, upstream, of demolition, dismantling and disassembly of end-of-life products containing FRP

These phases are not less delicate, nor less incisive economically, on the feasibility of the entire circular process, than the previously described phases of treatment aimed at the recovery / recycling of FRPs are not.

Specifically, in the marine industry, FRP composites are also used in complex and large-sized boats and yachts. Therefore it is clear that, he cost-effectiveness of recycling also passes through a rethinking of the design process, aimed at the design of new products, which take into account their disassembly at the end of their life, and a reorganization of the demolition operations, which exploit the robotization to reduce the interventions of workers in the process that can be demanding in terms of human resources and risky for employees in terms of safety.

Currently, the use of composites materials is essential for the marine industry. In fact, although it is true that for many years the nautical industry has used in a “naive” way this category of materials, without a real research to optimize the production technologies not exclusively manual like hand lamination or spray-up, in the last decade major steps toward technical and productive improvement were achieved.

Considering that up until the mid 90’, the vacuum infusion process was still a long way from representing what is now essential for boatyards.

In fact, nowadays even the shipyards that do not produce hi-tech hulls, are informed about the most modern molding techniques. In fact, there are many advantages deriving from these processes. To name just one, think of the drastic reduction of porosity and gaseous inclusions present in laminates obtained by hand-up up or by spray up with the consequent increase in the Gc impregnation coefficient and relative specific resistances and, most important, the release of considerable quantities of harmful organic volatile elements in the environment has been reduced by 90%.

We use cookies to ensure that we give you the best experience on our website. If you continue to use this site we will assume that you are happy with it.Ok