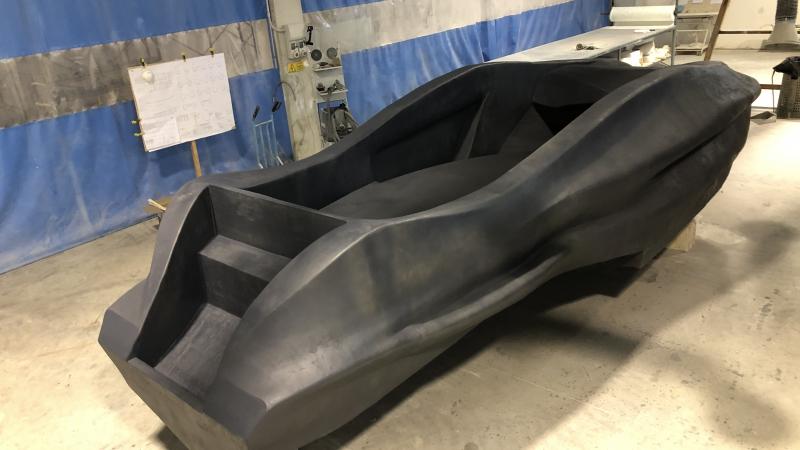 CFM technology uses continuous fibers, (in this case glass) which deposit from the head of a Kuka robotic machine in a controlled manner, following the tool-path generated by an intelligent planning software algorithm. This allows the creation of three-dimensional fiber-reinforced objects, having the same mechanical characteristics to those of unidirectional fiberglass, starting from a digital CAD file, without using additional equipment or molds and with less material waste. In this way, it is possible to obtain not only prototypes, but also real and functional objects such as MAMBO.

A 6.5 meter motor boat, maximum beam 2.5 meters, built with a Y-shaped hull inspired from the historical Arcidiavolo by Sonny Levi. A monoshell structure with organic and asymmetrical shapes was built on this, adapting functionality and design thinking without the constraints of designing a boat made with conventional technologies (draft angles, undercuts, hull and deck division, etc.). The upper part of the hull organically morphs into the boat’s other furnishings: the symmetrical tips of the boat transform, one half becomes the console and the other half becomes a ramp that brings users to the deck, where a drop-shaped sofa awaits and can be used as driving seat and couch.

Once the concept was clear and the executive project realized, the various unidirectional fiberglass sections were 3D printed using two anthropomorphic robots located in two physical places 1500 km apart. One in Milan, at the operational headquarters of Moi Composites, the other in Autodesk’s Advanced Manufacturing Facility in Birmingham, UK, making the best use of production delocalization, among the of additive manufacturing. The 3D printing was completed and the pieces were joined and laminated to give life to this one-off, challenging boat.

Each individual section was laminated in a sandwich with a PVC core, polyester resins and fiberglass fabrics, creating the layering of the plating and reinforcement structures and then joining them together. The production process was completed with aesthetic finishing of the external surface followed by assembly of the necessary boat equipment/accessories. MAMBO not only constitutes an example of a boat totally 3D printed in continuous fiber composite material, but will also be the first object of its type planned to be operative. Will be equipped with an outboard engine and launched next July 2020 to demonstrate how this technology is ready to produce objects for the market and not just showcasing prototypes.

To pioneer this ambitious project, Moi was supported by Autodesk, a company in the world of software, which provided the tools for the realization of the three-dimensional drawing of the hull, as well as the robot located in the United Kingdom.

Catmarine, a shipyard specialized in catamaran construction, with its experience has transformed the various sections produced digitally into a finished boat.

Micad, a nautical design studio actively involved in the field of research and technological innovations that took the challenge of engineering the complex structures of Mambo.

Last but not least, Owens Corning, supplied the glass reinforcements fibers and Osculati, a company in Italy for nautical components provided accessories capable of adapting to the curves and design of the entire hull.

This article was originally published on jeccomposites.com